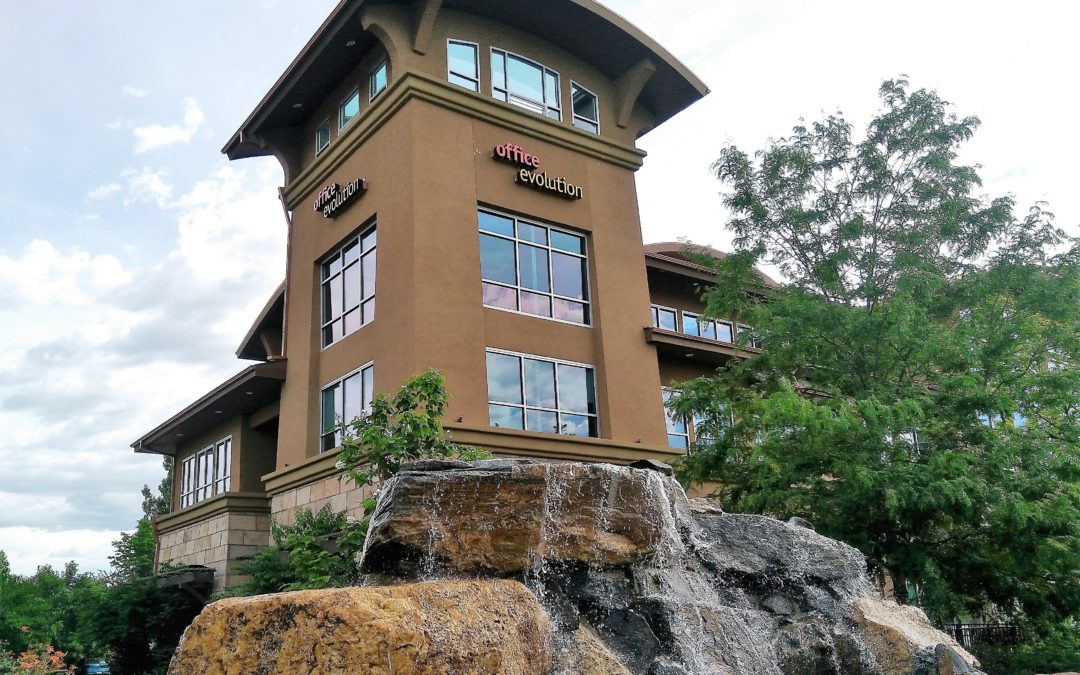 Heather Ollom, co-owner of Fort Collins’ Office Evolution, welcomes me into her suburban coworking space as if into her home. We chat about our kids and jobs as she gives me a tour of the expansive, two-story shared offices and meeting rooms of the Fort Collins Office Evolution. Later that day she will attend her kindergartener’s graduation and I, an English teacher by day, am also emotionally preparing for my high school students to graduate the next day. Despite the spring madness and bittersweetness of graduations, we stop to discuss coworking in one of her airy conference rooms.

In the expansive space with contemporary decor and several private offices, the southerly windows welcome in the sun and several large conference rooms are well appointed. The location, just off I-25 on Harmony road, is popular with locals as well as with what Heather calls “road warriors.” These intrepid coworkers traverse the Front Range and several Office Evolutions along the corridor. One of the benefits of a coworking franchise is this flexibility but most Office Evolution coworking members stick to one home office. 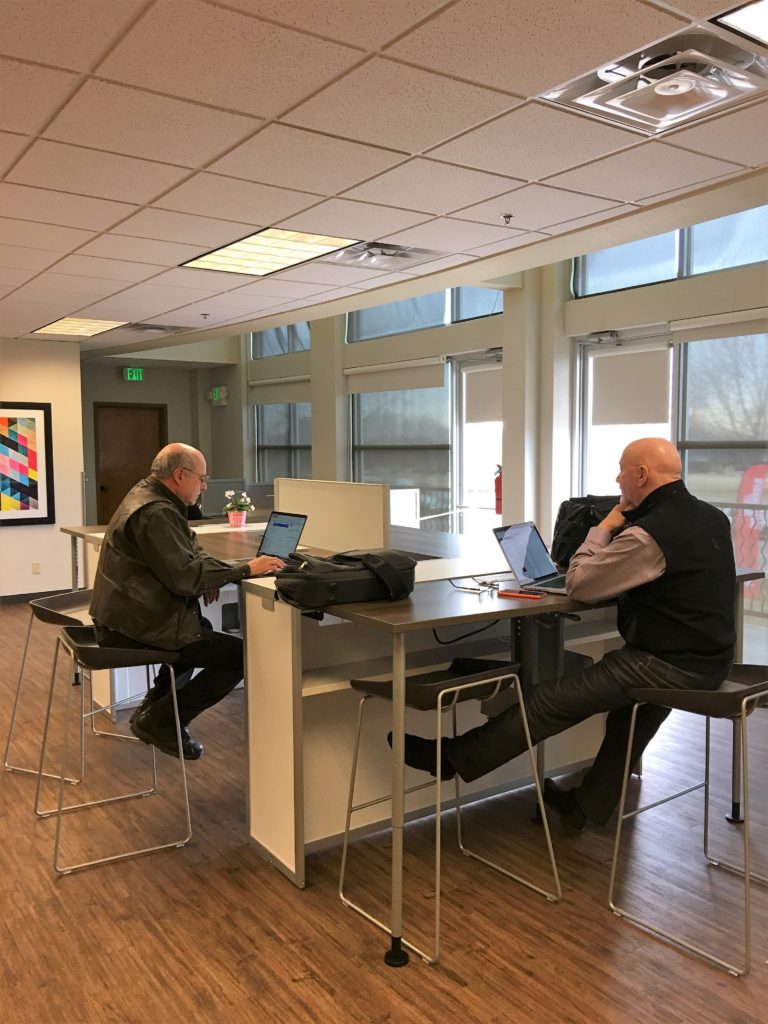 The coworkers here are mostly people with kids and so the culture is different from other coworking spaces. While some might linger for afterwork cocktails, Office Evolution members like to share catered breakfasts and lunches to build community during the work day. “We like to work hard so we can then play hard,” Heather says of the pervasive mentality. Folks who join Office Evolution choose the suburban rather than urban location and culture. “Summer is our busiest time!” Heather quips since many who work from home need to find respite from their kids during summer vacation. Fortunately for them, there are month-to-month rental spaces available.

The convenient location features many amenities. The Villaggio, the Italianate complex the shared office is housed in, has nearby breweries, restaurants, and shops. One of my favorite modern farm-to-table joints, Locality Kitchen and Bar, is just a five minute walk away. Front Range village, with a bookstore, library, and Sprouts Market lies just a half mile east on Harmony. When I visited the office space there were clients leaving a local salon in the afternoon and restaurants gearing up for happy hour on the ground floor. Office Evolution presides over the second and third floors and is a quiet oasis above the bustling commercial park. Despite being near a major intersection and in suburban Fort Collins, the atmosphere on the sidewalk was convivial and just a three minute walk away are landscaped parks, a water feature, and a fire pit. 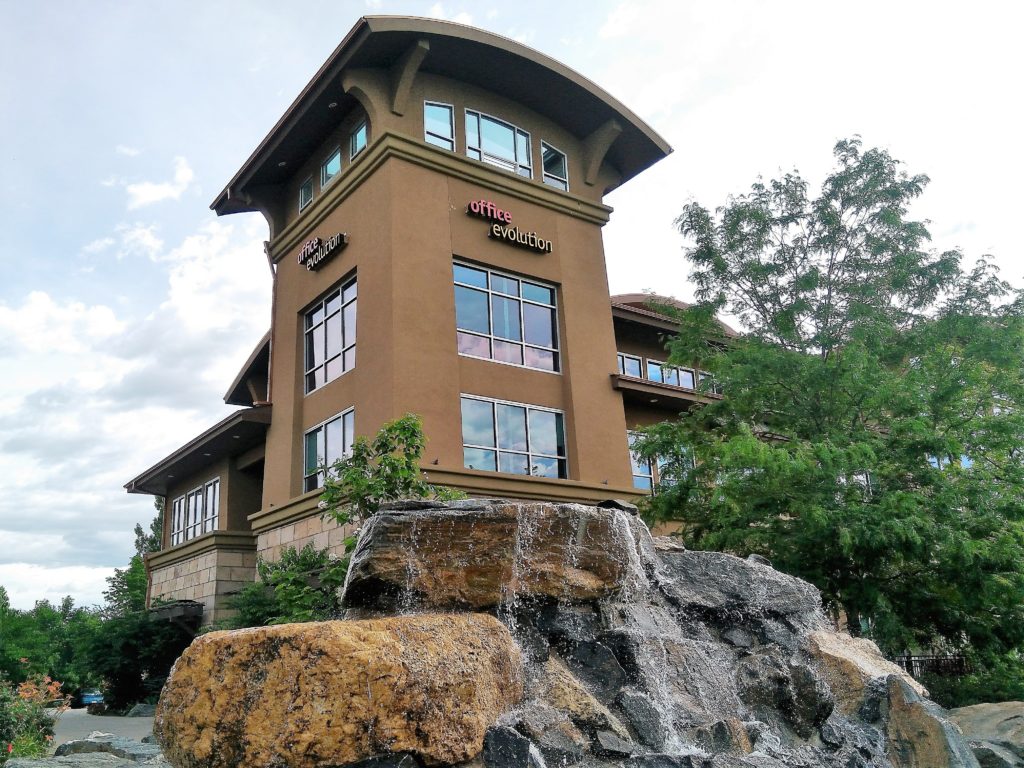 Heather makes this place feel welcoming. Nearly every Office Evolution, and there are 81 locations in 26 states, are owned by local residents of the area. So while Office Evolution is a franchise, it’s not a monolith. Influenced by the community members who own each franchise, every space has its own culture, size, and location type. While some chains can seem bland or confining, this space was quirky, clean, professional, and ultimately welcoming. There’s a private entrance, mailboxes, elevator, and all the necessities for a productive workday on the premises.Heather finds owning a franchised and branded coworking space freeing because she has constant support, doesn’t have to reinvent the wheel, and is in close proximity to the Office Evolution headquarters now based in Golden, CO. She says there is a tight community of owners whose shared knowledge benefits all. While the Office Evolution leadership offers guidelines, models, and time-tested protocols, each location has the freedom to operate differently and is allowed to make independent decisions. “We can all learn from each other,” says Heather of her fellow Office Evolutions franchisees. Her reasons for belonging to the Fort Collins Coworking Alliance are similar. “It’s so wonderful to be able to collaborate with and be open with others in coworking. We can share our knowledge and be better together,” says Heather. 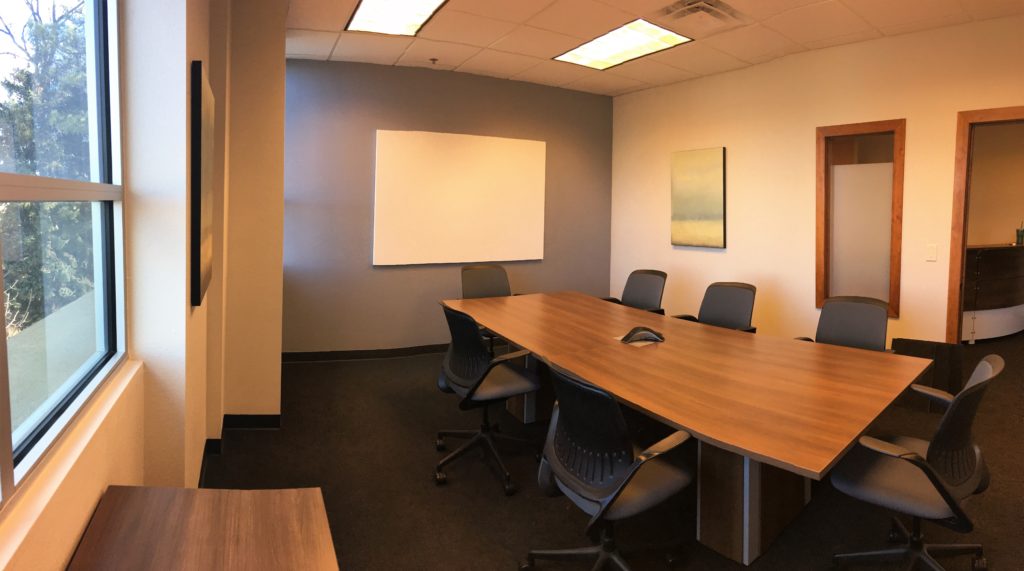 Heather learned of virtual offices when her husband and co-owner, Michael Ollom, worked for a start-up out of an Office Evolution franchise in Denver. Office Evolution was founded in 2003 as a Colorado company headquartered in Louisville. Eager to move out of Denver to avoid the traffic and looking for a business to support their growing family, they searched Fort Collins for nearly three years before finding the perfect commercial property on Harmony. With only a 1% vacancy rate for commercial properties, they were fortunate to have found such a large space for the Office Evolution franchise they bought in March of 2016. Most Office Evolutions are smaller than the sprawling 13,000 square feet of the Fort Collins location, but each of the two floors has its own personality. As we tour the space I am introduced to insurers, counselors, architects, video-editors, tax accountants, and more. Perhaps it’s the power of suggestion but it seemed as if each niche, common space, and alcove somehow took on the personality of the sort of work conducted in it; the video-editors have a corner room with heavy metal playing, large windows, and brightly decorated walls while the interior designers sit comfortably near each other at carefully arranged desks surrounded by tastefully potted plants.

“But what about coworking makes you proud?” I ask. “When members move on,” she answers. It’s kind of ironic, that the bittersweet moment when a coworking graduates to his or her own lease is the time Heather feels the most fulfilled, but I get it. “I’ve been cheerleading these little startups or entrepreneurs from the ground up. Watching the baby steps, watching something blossom and then outgrow this space makes me really proud to have been a part of it,” Heather says. At this time of year, feeling weepy about graduations already, I know what Heather’s talking about. Being a concierge to a growing business or a learning student is an honor. It’s also a ton of work.

Natalie Scarlett is a freelance writer, editor, journalist, and teacher in Fort Collins, Colorado. She is the founder of Huckleberry Literary and Cipher Creative Productions. In addition to loving all things literary she directs original film, theater, and movement pieces. Her writing has been published in Splat, Aspect: Ratio, Mid-American Review, and (Salt) Arts and Culture Magazine. She likes to write about Fort Collins local color, immersive theater, and any kind of art.